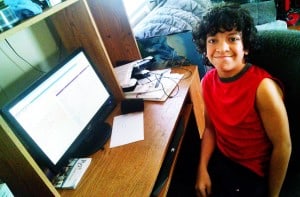 So I’ve decided we’ll be trying homeschooling again, well, virtual school anyway. We used K12 once before, and we’re using Connections Academy this time. They both are considered virtual public schools. This means that while he’s completing the work at home, he still has to follow the state rules and regulations of public schools. It’s not ideal, but right now it’s the best decision that I have time and energy for.

He is so much happier just knowing he doesn’t have to deal with the drama at school this year. While I’m not blind to his ADD and behaviour issues, the bully issues DO exist. I feel like he’s falling behind academically because we can’t concentrate on just learning. I’ve weighed all the ups and downs and truly believe this is best for him right now.

He’s agreed to return to Boy Scouts, and he’s joining 4-H where he’ll be able to partcipate in various projects, but he’s most looking forward to a comedy spin to public speaking.

We just finished our first week, and while there were several bumps, it wasn’t too bad. We just need to get it through his head that he needs to take the school part of the day seriously. He wants to rush through it and then play. He got pretty upset when I told him just because he was done early didn’t mean he could go play now. He has to put in 6 hours a day regardless. So we got him a book and found him some extra math work. He did miss a few quiz questions that I’m sure come down to his rushing, so this coming week we’ll concentrate on slowing down, paying attention, and doing his best.