Yes, I said FIRST haircut. Andrew’s almost seven and a half years old, and he finally got a major haircut. I’ve trimmed the top and sides to some degree, but never more than a half inch or so. Well, he’s been bugging me for some time now about cutting it. We were supposed to do it when we were at my mom’s for Christmas, but I started crying just as she was getting ready to cut it, and he wouldn’t go through with it. She’s here visiting us now and we promised she’d do it while she was here.

So last night we decided to get it over with it. I promised myself I would not cry. And I almost made it.  :)  Ok, I didn’t cry until after it was done. And I tried to wait until he went to bed, but I didn’t make it. I explained to him though that I just liked it long, but since he was happy with the hair cut, that’s all that mattered. Anyway, here it is. 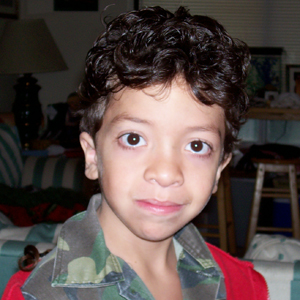 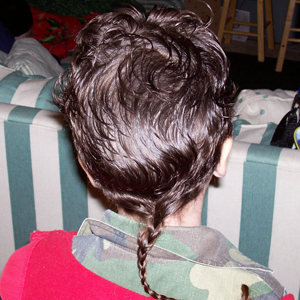 It’s like my baby grew up over night. Now people might actually start guessing him closer to his age of seven than four or five. Sigh. I took him to school this morning and the reaction of teachers and students was so positive the child is absolutely glowing. I can learn to live with this. I can.  :(