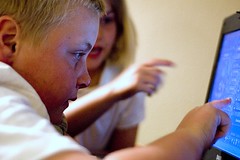 I’ve talked to Andrew many times about online safety since he’s on the computer a lot. He even has a mouse pad that reminds him of the basics. However, we recently came across a situation where I realized it wasn’t enough. I usually check on him quite often when he’s on there, but a couple weekends ago I had been sick and spent most of the day laying down, watching movies. At one point I got up to get a drink and decided to check on him. He had been checking on me pretty regular most of the day, bringing me drinks and making me sandwiches, and I hadn’t seen him for a while. So I walk in the office and he jumps up with a deer in the headlight look. Sign one. Then he says, “Mom, I love you! Can I have a hug?” Sign two.

After I hugged him and told him I loved him too, I asked him what he was doing. He said just playing a game. I asked him to let me see and sat down at the computer. He was in one of those chat rooms where you create a virtual character. He was in there with a girl. He had told her where he lived, including city. He had told her his first and last name. And he had told her he was 18. She had told him she was 14. I checked the account he had created and there he had used a birthday that made him 16. I was shocked since we’d talked about it so many times. I deleted his account, and he didn’t even look at the computer for two weeks.

I came across the following article today and it reminded me of that story. I’ll be sharing this site with Andrew. Regularly.

(SPM Wire)  As the first generation to be born in the Internet age, today’s youth have a wealth of information at their fingertips. But with that information come potential hazards.

That’s why the Federal Trade Commission has issued a free booklet entitled “Net Cetera: Chatting With Kids About Being Online.”

With over a million copies distributed to schools and police departments, it provides a practical guide for parents to help children make better decisions online. “It’s proof that people want to have continuing conversations with their kids about communicating online,” David Vladeck, Director of the FTC’s Bureau of Consumer Protection, recently told Congress.

Many of the tips in “Net Cetera” can be found online at OnGuardOnline.gov.