I totally blew last week’s menu plan. Well not totally I guess, I stuck to it the first half of the week. Then the rest was mostly chili leftovers. And I bought a frozen pizza on Sunday. We didn’t end up going anywhere for the Super Bowl and watched it at home just the two of us. Andrew was sure pizza was a must on Super Bowl. Yes, he’s a master of manipulation in pulling on the heart strings. But at the same time, he used part of his money to pay for it, so how could I say no? 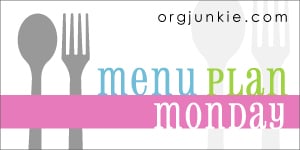 Monday: McDonald’s (We picked up a friend from the airport, and Andrew wasn’t feeling good. I just didn’t take the time to prepare ahead of time. Which is also one of the reasons this Menu Plan Monday is posting on Tuesday. Ahem.)

Tuesday: Kid has the flu so he had some soup. Andrew also asked for chicken nuggets. So I’m making chicken nuggets using basically the same recipe as last week’s fried chicken. It was that good. I’m using chicken breasts cut up to bite size.

Sunday: To be determined.