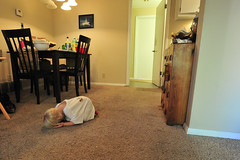 I’ve been leaving Andrew home alone when I need to run quick errands. He’s old enough now, and I’ve been trying to get him used to it. Today I needed to go to the store to pick MORE PENCILS {which is another post in and of itself} so I left him home. He has a habit of calling me to find out where I am and if I’m on my way home yet, etc.

As I pulled up to the house and parked, my phone started ringing. Of coure it was him. So I answered it and talked to him as I grabbed the bags and walked up to the house. When I put my key in the door and opened it, he stopped talking and said, “Mom? Are you here?”

In a split second decision to see what he’d do I said, “No.”

He says, “Somebody just opened the front door!” He was not yet sounding upset or scared, but before I could say anything else, in a voice of panic, he yells out, “HELLO?”

I felt pretty bad when he started crying and saying, “Why did you do that? I was scared somebody had broke in!” He went into total meltdown.

After I apologized and got him calmed down I said, “I did it to see what you would do. I’m thinking yelling out ‘HELLO?’ wasn’t the best idea. It probably would have been better to get under my desk and stay quiet.”

I felt really bad that he was so upset, but I think that in the long run the lesson in the end might have made it worth it. What do you think?