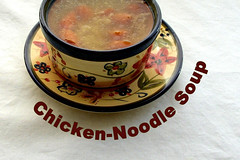 Some people swear that chicken soup can cure a cold. Others aren’t so sure.

Chicken soup has been prescribed since the 12th century as a way to fight off illness. Jewish philosopher and doctor Maimonides used chicken soup to treat a variety of health issues besides the common cold, but he highly recommended it for colds and other respiratory illnesses. Chicken soup is also called “Jewish penicillin” because it has been used so often to treat colds.

Before this question can be answered, let’s look at what goes into a pot of homemade chicken soup. Recipes will vary but most chicken soup recipes will consist of diced chicken, chopped carrots, onions, garlic, egg noodles, bell pepper and seasoning.

If we look only at the items on this list, we see that chicken supplies the body with zinc, carrots provide beta-carotene, onions and garlic are considered to be strong antivirals, egg noodles provide selenium and peppers contain salicylates. Each of these ingredients has medicinal qualities which, when combined, may provide the body with nutrients it needs to fight off the common cold.

The medical community may not be able to agree on whether or not chicken soup can cure the common cold, but they do agree that there are positive results from eating it. Consider the following:

It would seem that chicken soup does provide many health benefits, but the medical community isn’t ready to start giving people prescriptions for it. Even if it doesn’t cure the common cold it tastes much better than traditional medicines which means people won’t object to taking it.

Does chicken soup really work against colds? There isn’t a definitive answer. It appears to help on some level. Does this mean that you can toss the over-the-counter medicines the next time you get a cold? That’s probably not a good idea, but you may want to consider cooking a big pot of chicken soup to go along with the traditional medicine your doctor recommends. Even if chicken soup doesn’t work, it’s still a nutritious and delicious way to help you feel better.

Even better? Check out some other natural ways of dealing with colds to use with your chicken soup. I’ve recently started using essential oils, and I swear by their medicinal qualities. I still go to the doctor if they don’t work or things seem to be really bad. You just have to use your best judgment. Since I started using them though, I’ve found that most the time I can combat what ails me or Andrew with the essential oils.