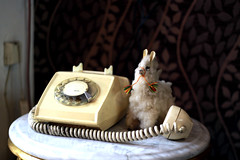 The other night the power out went out in our part of the city. Happens a lot here this time of year. All the air conditioners on I would guess. I quickly realized our only telephone on the home number is cordless and wasn’t going to work. Since I didn’t have many minutes available on my cell phone, I decided it was a perfect time to go to the store and purchase a regular corded telephone. I told Andrew to get in the car we were going to the store. As we were leaving, I told him what we were going for. And then spent the rest of the ride trying to explain the difference to him between a cordless phone and what we were on our way to purchase. Finally, I had to just tell him he’d just have to see it when we bought it because I didn’t know how else to explain it.

So we get the phone and he’s like a kid on Christmas. He immediately opens it in the car and starts trying to figure it out. At one point I hear from the back seat, “This is SOOO confusing me.” By the time we got home, the power was back on so I told him to go ahead and plug it in so we’d have it for future needs. Not only does he plug it in, but he also spends the next several minutes playing with it. It was seriously tripping him out to have a telephone that had a cord. I finally had to tell him it wasn’t a toy and to stop playing with it. I’ve had to tell him several times since then. He’s obsessed with this new phone.

Next week maybe I’ll hunt down a rotary telephone. That’ll blow his mind.